Each week, the 34-year-old, who is based in Melbourne and works in financial services, watches at least half of the AFL fixtures on offer, not necessarily because he is interested in the game itself, but because he wants to see how his players are doing.

“Even if I’m not watching it, I’m checking the score,” Dunlop said.

“Any moment that I get, if I’m not being anti-social, I’ll be checking the game stats.”

This is what an AFLW fantasy football team looks like.(Supplied: Kate O’Halloran)

For those who don’t understand how AFL fantasy football works, the concept is fairly simple.

You’re tasked with being a fantasy “coach” who has a budget to spend filling a football team of six defenders, eight midfielders, two rucks and six forwards (plus an interchange bench).

Your players then accumulate points based on their performance in real life — with a set amount of points awarded for actions like tackles, goals, kicks and handballs.

Because you have a salary cap — like a regular football team — you can’t just choose the best players in the league, which is where strategy comes in.

Players are priced according to their predicted performance, so proven stars are the most expensive in the game. Coaches therefore often have to choose a mix of ‘guns’ and rookie players in their first year, who are the cheapest to buy.

After your team is finalised, you compete against other “coaches” and their fantasy teams, vying for a spot in the finals and, ultimately, premiership glory.

Some leagues — like the official AFL Fantasy competition, and News Corp’s Supercoach — offer cash prizes and cars, but many players compete with friends simply for bragging rights.

“I think it’s the competitiveness of it that I love,” Dunlop said.

“You’re hoping that you can beat other people at putting your team together.” Dunlop isn’t alone. Fantasy football — as silly as it might sound to those who don’t play it — is serious business.

It’s much more popular in the United States than it is in Australia, but in both countries, it’s worth big money. In 2013, Forbes estimated the value of the fantasy football market as $US70 billion, which dwarfs the revenue of the NFL (around $US11 billion in 2021).

Until this year, Dunlop had exclusively played AFL men’s fantasy football. Now, however, he is one of almost 4,000 coaches who are trying their hand at the newest product on the market: AFLW fantasy.

As is the pattern with his consumption of men’s football, he’s found himself hooked.

“I’ve got the AFLW app on my phone, mainly for statistical purposes,” Dunlop said.

“I’m looking at the team sheets, to see where players have been named — like if they’ve been named on the ball, and are likely to score more points.

“I’ve 100 per cent watched way more AFLW games, purely because of the fact that I’ve got a fantasy team.”

In his case, greater investment in AFLW has also led to an increased appreciation of the game.

“The newer players — like Montana Ham — you can tell she’s played football her whole life because the pathways [from junior to elite football] were available to her. She’s just at a different level. “And the really underrated thing about the women’s game is the ferocity of the tackles. Some of it is just brutal. They’re just smashing in to get the ball, it’s crazy.”

This kind of fan engagement is music to the ears of the co-creators of AFLW Fantasy.

Despite the name, AFLW Fantasy is not an official competition run by the AFL.

The AFL does run AFL Fantasy (the AFL men’s competition) but, after seven seasons, is yet to announce a women’s equivalent.

AFLW Fantasy is instead the brainchild of co-creators Selby Lee-Steere and “The Wongster”. Lee-Steere, who lives in Fremantle, is something of a legend in fantasy football circles. He has won AFL (men’s) fantasy twice, and came eighth in Supercoach AFL on his first attempt (the two competitions have different scoring and rules, making this an impressive feat).

The Wongster, by comparison, is relatively new to the fantasy world, and is a 51-year-old former bond trader. As is sometimes customary in the fantasy football world, she prefers using a moniker to her real name. The Wongster is relatively new to fantasy football, but felt passionately that there should be a women’s competition. (Supplied)

“It adds to the mystery,” she said.

“Plus, when I was a bond trader, that was what people called me, so I actually don’t mind it.”

The unlikely pair met when The Wongster, who lives in Sydney, went into semi-retirement and decided to study machine learning — a type of artificial intelligence.

She needed a project to complete as part of her study, and with her son an avid fantasy football player, decided to try her hand at building a model that would predict AFL fantasy scores.

In the process, she was introduced to Lee-Steere, and the two would go on to form the team behind Moreira’s Magic — a fantasy sport resource site with something of a cult following.

The two were also interviewed by the ABC earlier this year, where The Wongster was filmed using an algorithm to choose an AFL men’s fantasy team.

Watching an AFLW game together one day, The Wongster was struck by the fact that there were no official fantasy football offerings for AFLW, or women’s sport more broadly.

At that time, the AFL had put out a survey on social media asking if there was any interest in an AFLW competition. The respondents did not embrace the concept.

“I think maybe the AFL decided not to run their own competition because there weren’t enough respondents,” The Wongster said.

“And it wasn’t clear cut that people really wanted it.”

It’s also not clear if the poll was a victim of a more general and insidious misogyny that plagues social media posts about AFLW, a possibility The Wongster has pondered.

Undeterred, she and Lee-Steere backed the idea in, throwing themselves into the task of building an AFLW fantasy competition from scratch.

The Wongster estimates that she spent 80–100 hours a week over the next few months, building the infrastructure to support the “minimum viable product”.

“We figured, if you build it, they will come,” she said.

It was a smart bet.

In its first season, AFLW fantasy garnered around 1,800 team registrations.

In fact, demand was so high that the AFLW fantasy server crashed, forcing Lee-Steere and The Wongster to pour their time into fixing a number of affected teams.

“It was a lot more work than we first expected,” Lee-Steere said. 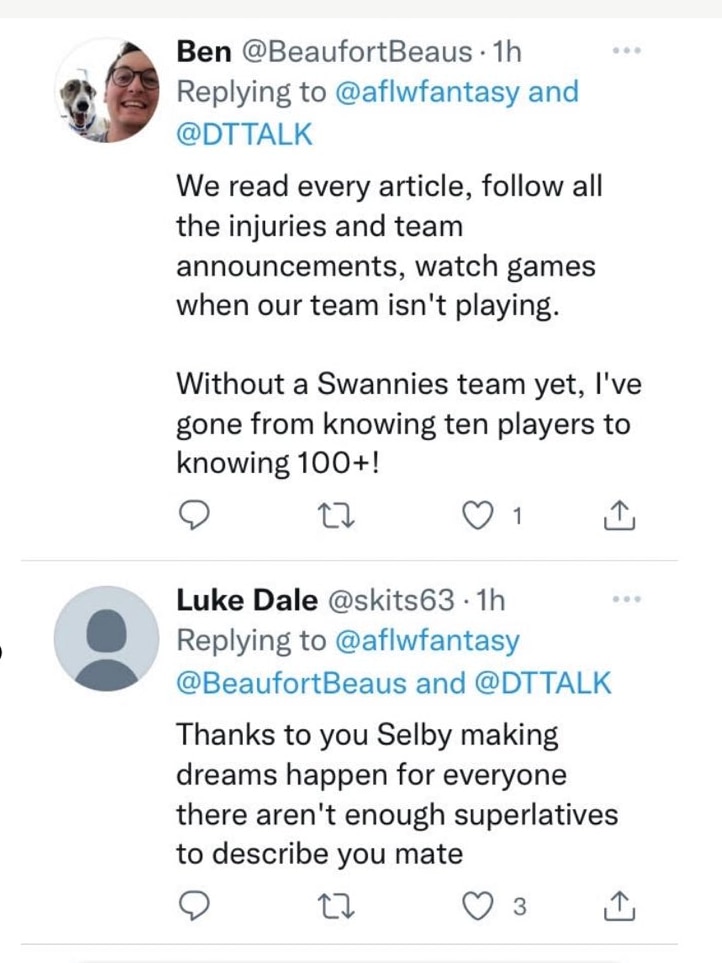 “I thought we’d be able to set it all up, press a button and away it goes, but we had issues after issues — which is good, because it showed people were passionate.”

Now in its second season, registrations have doubled again to over 3,850.

Indeed, on the opening night of the AFLW season, #AFLWfantasy was trending on Twitter.

There’s now two podcasts dedicated to AFLW Fantasy strategy, one of which was the top-rated fantasy sports podcast in Australia in the week leading into round one.

A number of websites are also running articles about AFLW Fantasy, including those that have previously only covered the men’s game.

“People have really embraced it this year, you can feel it. They know it’s there and they love it.”

“It has spawned its own little ecosystem,” The Wongster said.

“Fantasy players — if you look at the tweets — they’re starting to know the players intimately. It’s generating much richer information about how the game is played, and the players’ names are getting out there as household names.” The pair’s ultimate goal, they say, is that more eyeballs on the sport leads to “women getting paid better”.

“I’m obviously a believer in the power of fantasy sport,” Lee-Steere said.

“When more people consume the sport, it bumps up advertising, which bumps up pay, which means the players can become full-time and apply their craft. That in turn improves the product, which means more people will watch it.”

The pair also believe they’ve managed to tap into a segment of the market the AFL’s poll missed.

AFLW Fantasy demographic data shows that 50 per cent of those registered also play a form of men’s fantasy football.

Another 50 per cent, however, are new to fantasy football — and are more accurately characterised as fans of women’s football.

“So you’ve basically got 50 per cent of players who are hardcore fantasy fans, who want another challenge, and another 50 per cent who represent a completely new market,” The Wongster said. The Wongster says the pair have received many messages from dads excited to take their daughters to AFLW games. (Supplied)

They’ve also received a range of messages from participants like Dunlop, who have discovered AFLW through fantasy football.

Why doesn’t the AFL run its own competition?

While AFLW Fantasy no longer takes 80–100 hours a week to maintain, Lee-Steere says he is still putting in approximately 20 hours of time a week to keep the competition running.

After round one, he was up til 1am trying to finalise teams’ scores.

The Wongster, meanwhile, is on a three-month pilgrimage in France, but has made herself available at 6:30am each morning to troubleshoot any coding issues over Zoom. 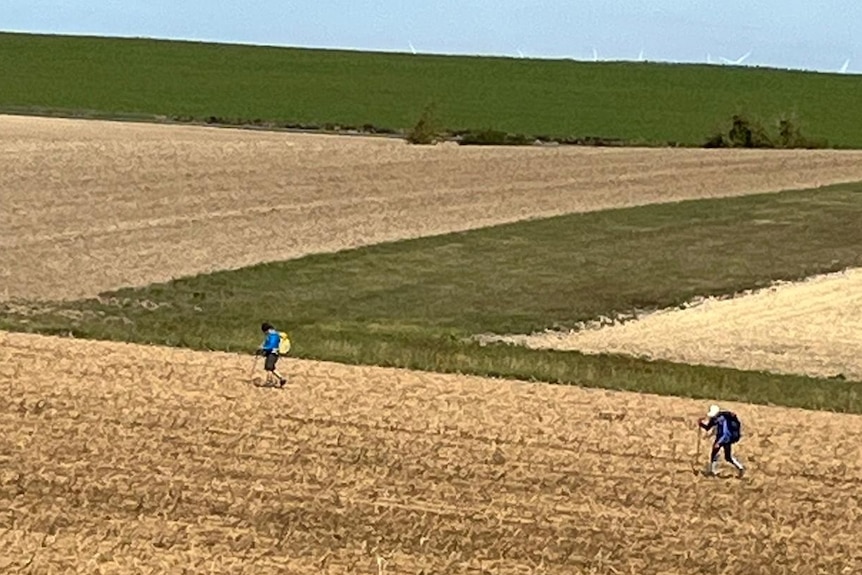 A pilgrimage through France hasn’t stopped The Wongster from being on call to fix any technical problems. (Supplied: The Wongster)

Both are volunteers. Their only source of revenue, apart from prize sponsorship, comes from a $10 package of exclusive AFLW content they offer to subscribers.

This is not enough to pay them a wage, but covers development costs.

Such dedication raises one of the obvious questions — why isn’t the AFL doing this work itself?

“I can’t imagine it would be difficult for them to set up,” The Wongster said.

“They have got the infrastructure there already [from men’s AFL Fantasy], whereas we’re trying to build it from scratch,” added Lee-Steere.

“Maybe it’s not commercially viable for them to be running it at the moment, but the obvious pay-off is that more people watch the sport, which for them is beneficial.”

While Lee-Steere says he doesn’t like “bagging” the AFL, he also points out that the only official AFLW competition run by the AFL is AFLW Tipping, which has a major prize of $2,500.

AFL men’s Fantasy, by comparison, offers a car valued at $60,000 as its first prize.

AFLW Fantasy, meanwhile, has a first prize of $3,000 (more than the AFL’s official tipping competition).

The ABC asked the AFL why there was no official AFLW fantasy competition.

“We understand and encourage the interest in additional AFLW products, and we will continue to investigate new offerings for fans as our competition continues to grow its supporter base and further establish itself in the Australian sporting landscape,” a spokesperson said.